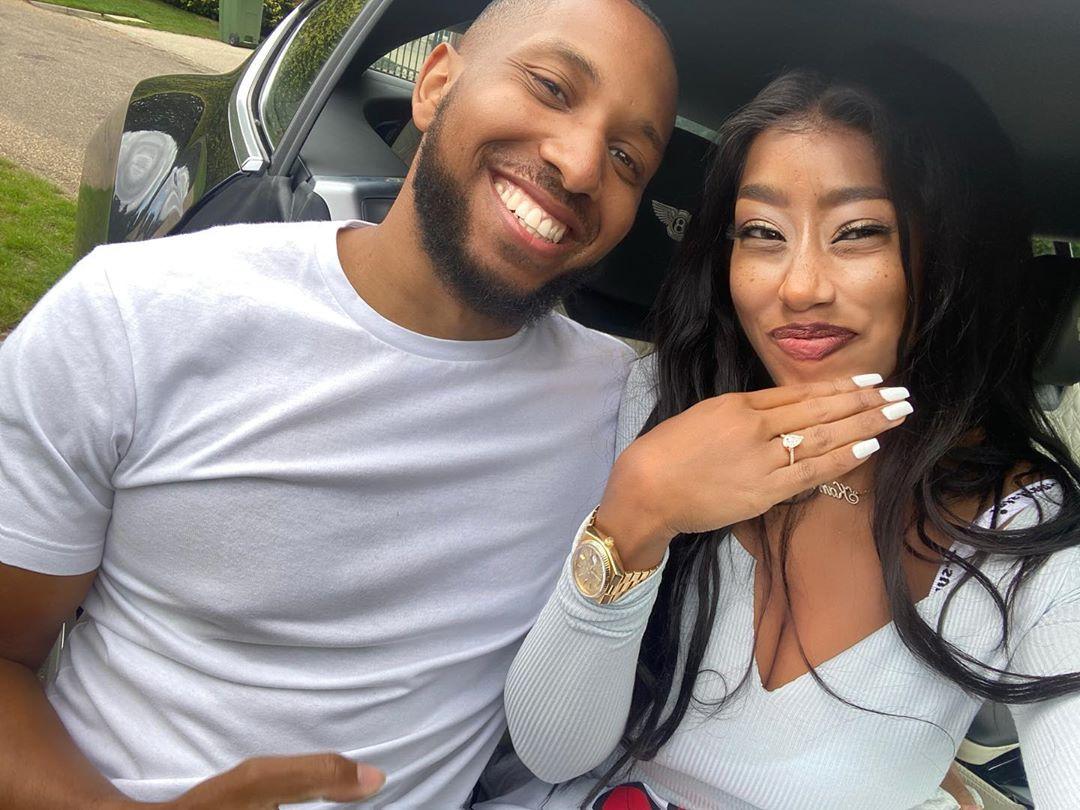 When a Jamaican Cuban sensation meets her dream Nigerian sensation, y’all know it’s bound to be one hell of a blessed African Caribbean union and a super duper LIT wedding loading! Singer Songwriter Kamille who has penned numerous no.1 singles melting our hearts to the likes of Little Mix’s songs ‘Black Magic’, ‘Shout Out to my Ex’, is engaged to her beau DJ Producer Tazer. Whoop Whoop! It seems the Nigerians and Jamaicans can’t get over each other, here’s Are you The One Stars, Clinton Moxam and Uche Nwosu’s engagement love story who are also both Jamaican and Nigerian.

Tomi Adenle aka Tazer popped the magic question to Camille Purcell (Kamille) on her birthday. What a gent and lad, perfect birthday present to his Caribbean queen. For real, nuff respect from another Nigerian Jamaican. Yes, I (founder of My Afro Caribbean Wedding) decided to pen this proposal feature myself knowing this union resonates personally with myself having a family from both countries. Our writer, Dr. Onye was going to pen this but when I said she should allow me to write it, she was qiute surprised. But that’s another story for another day.

Getting back to their proposal story, we initially spotted the engagement annoucement on popular dating and relationship influencer Toni Tone’s twitter post, who announced that her brother Tazer was engaged. Activating our FBI Journalist mode, we went to dig out for the beautiful couple on Instagram and boom.

My brother proposed to his girlfriend yesterday!!!! I’m so happy for you both @tazerofficial @KamilleXX . Can’t wait to gain another sister!- @ToniTone

DJ Tazer shared the following romantic caption on his Instagram. How sweet is he? No wonder he bagged the Caribbean goddess:

She is my forever. Met you in November and spent 4 of these months locked away in isolation with you. The best time of my life. – @tazerofficial

Camille Angelina Purcell, known by her stage name as Kamille, is a talented black British singer, songwriter and record producer who has penned several award-winning singles for the likes of Little Mix, Rihanna, Timbaland, Jess Glynne, Sam Smith, Kranium, Jessie J, JLS, Clean Bandit and so much more. The 32-year old south London queen was born and raised in Streatham, but also reps her Caribbean roots with heritage from Jamaica and Cuba.

Camille graduated with a degree in economics, in which afterwards she worked as a stockbroker in the city. However, she was too inclined to music, and we are definitely not surprised she quit her 9-5 job to go into her love for music full time. Her pure class talent was so needed for the industry that she 100% made the right choice. Till date, Kamille known for her top notch songwriting credits have contributed to over 3 Billion Spotify streams and over 3 billion YouTube views across official music videos alone

Her first major hit song written for The Saturdays’ was ‘What About Us’ with Sean Paul in 2012. As well as being featured on ‘More Than Words’ with British Girl Band Little Mix, Kamille has also written over ten songs for Little Mix’s alone: ‘Think About Us’, ‘Strip (featuring Sharaya J)’, ‘Monster In Me’, ‘Love A Girl Right’, ‘The Cure’, ‘Forget You Not’, ‘Reggaetón Lento (Remix)’, ‘Power’, ‘Black Magic’, ‘Hair’ and ‘Shout Out to My Ex’.Her own classy ‘chunes; includes ‘Emotional’, ‘Love + Attention‘, ‘Body’, ‘Don’t Answer’, ‘Selfish Love’ and much more amazing songs. Since this queen is our sister, should be given credits for her immense talent and also celebrated. Grab your head phones and check out videos of some of her songs below and don’t forget to follow the couple on their social media channels:

Bwoy bet you wouldn’t have known this gyal got talent. Shout out to all her Ex’es who missed out on this beauty. Mr Tomi Adenle, you bagged a Caribbean talented goddess no doubt and y’all are a perfect match for the black music industry. Momma gonna be proud of you.

But on the real, we are rooting for their love and already counting down to lil babies Tazer and Kamille. Why not, I’ll baby sit no worries!! (Sticks tongue out).

Tazer whose heritage is Nigerian, has released various top songs such as no.1 single ‘Vibrate’, ‘Wet Dollars‘ which featured a sample from The Notorious BIG. Tazer has worked with artists such as Ellie Goulding and his song ‘Wet Dollars’ was also used in Teyana Taylor’s and Iman Shumpert’s ad for their new VH1 show.

Tazer is also the younger brother to the popular social media influencer Toni Tone who I bet would have assisted her lil bro with some dating and relationship tips. The siblings are like 1 and 2 from their social media posts where Tazer likes to call Toni his “big headed big sister”. Gyal, he got you good. I had to check out your pics again to verify. Lips sealed on this one.

We can’t wait to follow Tazer and Kamille’s love journey as they begin to prep for their Nigerian, Jamaican Cuban wedding. I just have a feeling this would be a destination wedding. Guys send our invites over if y’all going to the Caribbean. Trad things first though probably in Nigeria, get your Asoebis ready and y’all make sure Camille is hooked up with the African trad outfits, especially the gele (African headtie) so she looks like a proper African queen.

Congrats again guys, and best wishes on your blissful journey to together forever. Welcome to ‘di’ club. Don’t forget to support at least 1 or 2 black wedding vendors and small businesses who continue to need our support during these trying times.

Just me trying it, who knows. But if you’re in need of a wedding planner in your pocket, y’all can also register as a couple on our website and utilise some of our innovative wedding planning tools (wedding budget calculator tool, to do list / checklist manager tool, guest list manager, RSVP tool, wedding vendor wishlist tool to help with . Yes we did that! Black people got excellence too.

6 Things to Consider When Choosing a Wedding Theme